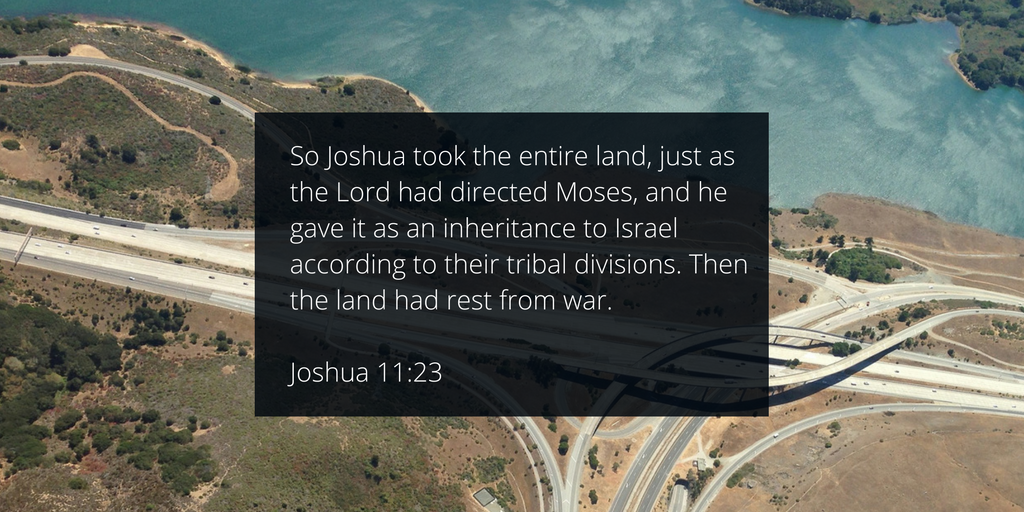 More kings of the region heard what had happened to the combined armies of Jericho, Ai, Hebron, Jamuth, Lachish, and Eglon. More kings and armies representing several other regions gathered together to defeat Israel, forming a vast horde. They were the armies of: Hazor, Madon, Simron, Acshaph, the northern hill country, the Jordan Valley , Galilean foothills, Naphoth-dor, Canaan, Amorites, Hittites, Perizzites, Jebusites, Hivites. In other words, a HUGE threat.

And yet, the Lord said to Joshua – “Do not be afraid of them. By this time tomorrow I will hand all of them over to Israel as dead men” (11:6). So Israel traveled to the water near Merom and attacked suddenly. And the Lord gave them victory over their enemies.

By this time Joshua has already conquered so many peoples, land, and kings that they are in a good rhythm of success. Joshua did not take this success for granted. He continued to wait on the Lord and listen for His commands. Regardless of how outnumbered they were, the Israelites continued to show up to battle and expectantly await the Lord’s help

What kind of difficulty am I facing this week and how am I to tackle it? By myself, I am only limited by my human effort, but with God everything is possible. He loves to see our faith at work when we simply show up and expect Him to fight for us. No matter how outnumbered we may feel, no matter how difficult the task – God is for us and will make everything work out for the good of those who love Him.

Lord, I have allowed my sin to take me away, day after day, without consulting you or giving you a chance to fight on my behalf.

Help me to please you with my words and actions. Help me to show up and just take one step at a time. I know that you will take care of me while I work out your will for my life.